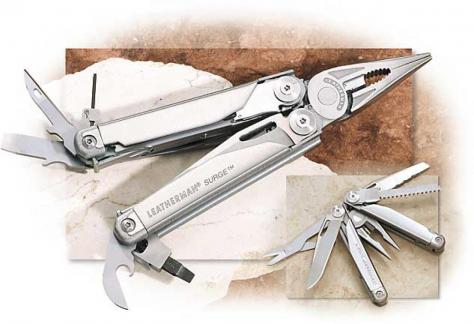 You either know what a Leatherman Multi-Tool is or you don’t. If so, skip ahead.

If not, according to the Leatherman website “The Leatherman Surge is one of our two largest multi-tools; a real powerhouse, built with our largest pliers, longest multi-tool blades and easy-to-use locks. A unique blade exchanger, large and small bit drivers and four outside-opening blades give you quick access to the tools you use most. The Surge was built for tough jobs and the hands that do them.”

So, with that being said, let me tell you what I personally think of the Leatherman Surge Multi-Tool. This is the best version of the Multi-tool family of products offered by Leatherman. I have beat, abused, trashed, pounded, twisted, and crushed mine repeatedly for several years now and this thing just keeps on giving back. It has the most convenient design and tool placement that I can think of. Nothing else is needed here. Note to Leatherman: “Do not change this tool ever! You have achieved perfection!”

Being in the remodeling trade as I am, I probably reach for this tool at least 10 times a day. Most of my usage is with one of the two knives, followed by the pliers and then the saw blade or file. Which by the way is great because I can insert any bayonet style jig saw blade into the built in holder. The scissors have come in handy and screwdriver bits get a lot of use too.

I may be a little weird when it comes to my Leatherman. I pretty much wear it from the moment I get up in the morning till I strip down at the end of the day. I have gotten used to packing it on my belt, and if I ever do forget it somewhere, panic sets in and things are not right till it is back on my belt.

Once in a while I will clean and lubricate the tool. I have had to grind off construction adhesive, mortar, and paint. I have had to soak it in thinner to remove packed in grease and debris. I sharpen the blades about once a month and that is about it.

I did do some damage to my Surge one time. I was going way beyond what the tool was designed for and I snapped off the serrated blade. I limped around with it for a couple of months being one blade down and then I managed to snap off the other one using it as a pry bar! ( I know, it’s not made for that.) Don’t tell me you have only used screwdrivers on screws. So I sent it back to Leatherman under their warranty repair program in just a few days, It came back fully repaired, in fact better than I expected. And at NO CHARGE! They even put a new screwdriver bit in it for me.

My advice to you is that if you are going to buy a Multi-Tool, get this one. I have tried many others. I have had several previous versions, competitors tools, a Swiss Army knife, and some of the latest from Leatherman, but I keep coming back to my “Surge”. Get this one and you will not be disappointed.