I mentioned a while back on the HomeFix Radio Show the light that I installed inside out lazy Suzan cabinet in the kitchen.  I received several email inquiries about how this was done and asked if I could share some pictures of the install.  Sure, why not.  OK, the why not is that this is probably at least 5 electrical code violations even though it works great.   I should also note that the install was somewhat planned out in advance as you will see by the power source I provided inside the cabinet.  More on that later. 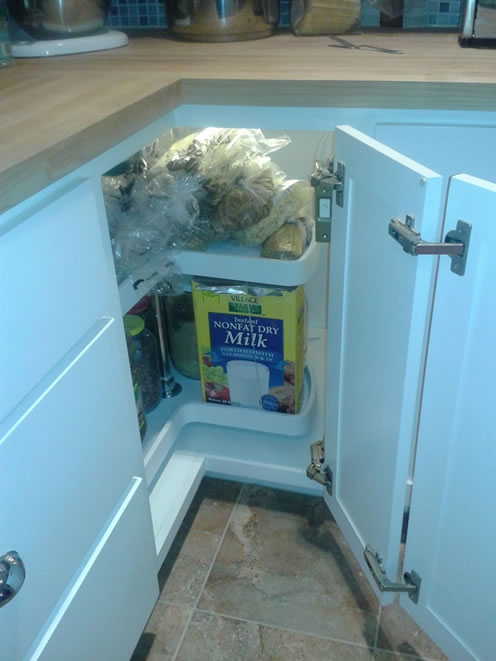 Here is a picture of the door on the cabinet open.  The installation here is of a hinged door Susan cabinet.  If your door is attached to the rotating shelves, this exact install will not work.  You can see in the photo, the light is on and the cabinet is bright inside.  At first when my wife Vicki told me about this feature (seen in some magazine) I didn’t see the value of it.  However, after living with the illumination now for a while, it is kind of nice.  Also, it has some major “Oooh Wow!” when people see it.  Here is how it is done.  Or one way . 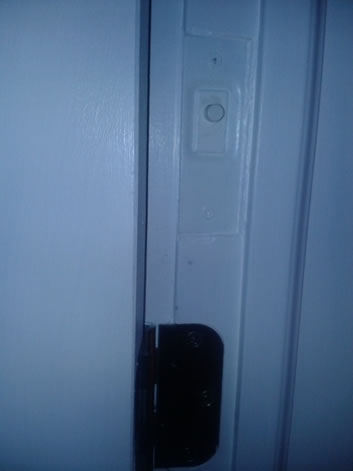 The switch is a standard door jamb switch that is used on hinged walk through doors.  It is a fairly generic part and has been around for a long time. They are available at Ace Hardware stores, Home Depot and Lowes, and electrical supply houses for about $15.  Shown above is one I put in several years ago on a hall closet.  This one is wired into the overhead light in the closet so open the door, light on, close door, light off.  Pretty handy for those quick access locations. 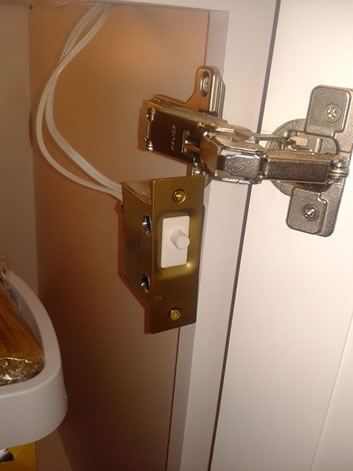 The switch box is all metal except for the push button.  I drilled two holes through it so I could get screws into the face frame edge of the cabinet.  The two wires are retained at the box with a romex clamp.  Violation #1- probably should be shielded cable.  One of the wires is coming in from the poser source, the other goes to the light fixture.  The neutrals are wire nutted together in the box, the other two pass through the switch. 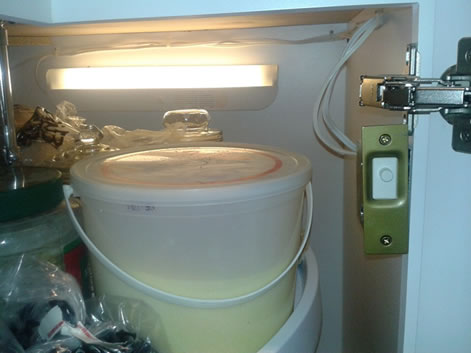 The light is from an 18” under cabinet fluorescent .   Wires are secured with straps and screws. 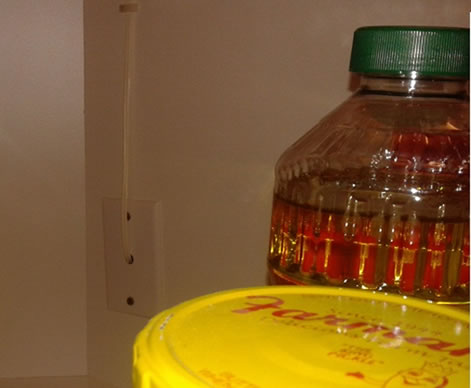 Violation #2- I ran the wire into a box that is installed through the back of the cabinet.  A CATV cover plate provided a convenient hole.  #3,4,5 are all here somewhere I am sure.   The power comes from a dedicated circuit I ran for all of the under cabinet LED lighting and this light.  No outlets are on this breaker, just switched lighting.  This is what I was talking about at the beginning.  I knew that there was a desire for this feature before the cabinets went in, and I was able to wire the wall behind the cabinet before the cabinets went in.  I can pretty much guarantee that your cabinet does not have an outlet in it just waiting for this.  So, you might have to pull new power from a nearby outlet or another source from a basement or crawl space.  Check with an electrician on this.

We like the light in the cabinet.  So much, I think I’ll add another under the kitchen sink and one in the pot and pan cabinet under the cook top.  Less than $50 total and about an hour of  work for the install shown here.

1 thought on “Project: The Right Light”