If you are a listener to the HomeFix Show you know that I do not talk about things that I do not experience first hand. I want to try stuff. I learn by doing. I also try to take the basic “Guy” approach and just dive into it without a lot of planning and evaluation. In most cases, things go horribly wrong. This wasn’t one of them.
An email came in one day introducing me to this product. Before that, I had never heard of it. It claimed that it was a refinishing product that “would change the way the world looks at home improvement.” Ever seen Mr. Spock on Star Trek raise that eyebrow in skepticism? I did that. So with curiosity peaked, I agreed to try a sample of the product. A bit later, a box showed up at my door. 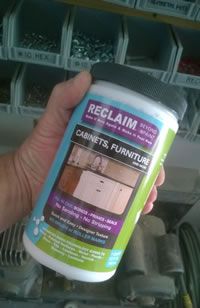 I must say that opening the box was a bit anti-climactic. There was the quart of RECLAIM paint, a 3” chip brush, a cute little roller and frame, and a roller tray. This part was fine but the printed information in with the products was… well… thin. There was nothing much there. On one page, a note that said thanks for my interest in the product. The second and final page telling me again about how this was going to change things (eyebrow lifted again in a reflexive response) and some simple 5 point instructions.
“That’s it?” Not even a “Go forth and paint!” ? I have to admit, I was less than overwhelmed. So I set the box on my bench and clicked off the light in the shop.
At a yard sale about a month later, I found a great deal on a girls dresser. It had my 20something Daughter written all over it. A quick photo text to her confirmed how I knew her
better that she thought I did and the dresser was loaded into my truck and transported to the shop. We knew it had to be repainted and we knew it needed to be white. Getting from A to B thought was not something we looked forward to. The excuses flew and so did time. We worried about all the sanding, the priming, the multiple finish coats, the long dry time in-between, and the acceptance in the beginning of the less than perfect results we would achieve because of the fading desire as each consecutive step is realized. Over 3 months went by and then the perfect weekend presented itself. We decided to jump in and I remembered the box on my bench with the product I agreed to test. “Lets try it” I said. She agreed, but she wanted to do it. She asked for the instructions. I handed the paper to her. “That’s it?” she said. “I Know! That’s what I said . “It can’t be that easy can it?”

So we wiped down the dresser with an old wash rag and some warm water. Nothing else. We inspected the surface and agreed that we didn’t want to make a big production out of this. 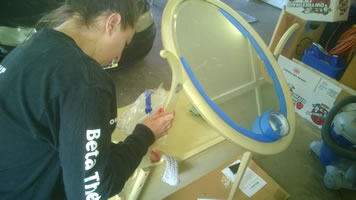 The hardware from the drawer was removed and tossed into the bin with all the other hardware we have that doesn’t match anything. Some day we hope to accumulate enough hardware that pairs and sets will develop out of the shear quantity on hand. We masked the mirror, took a deep breath and twisted open the cap on the RECLAIM.
I like on the instructions how it says in Step 1 to use the brush and “simply mush or stipple into crevice areas.” Mush and Stipple- Two words you don’t often see in instructions. But spot on as far as communicating the technique necessary to work with the product. The Bright White material is thick and smooth. The brush worked great to apply into the carvings and router paths of the dresser. The roller rolled as expected and made quick work out of the flat surfaces. 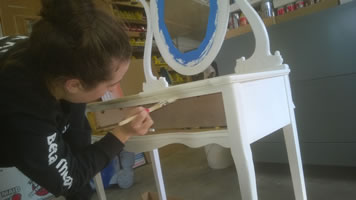 The words “That’s it?” came out of us again. It didn’t take but about 15 minutes for us to knock out the first coat on the dresser. It looked a bit more “Textured” than what we were expecting, but it did say on the container that it was a Designer Texture whatever that meant. That description was printed right above “Foolproof “ and while I usually live up to expectations such as that, I trusted the texture would be designer enough to satisfy us after it dried. 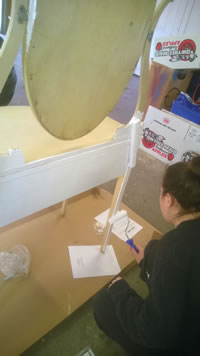 After a few hours, the surface pleasantly surprised us with the lay down of the texture. It looked good, but a second coat was expected and needed.

We applied the second coat and it was completed even faster than the first.

Our weekend had come to an end and the dresser was safely resting in the shop to cure and wait for us to find some hardware for the drawers.

The following morning I went to the shop for something totally unrelated to the dresser project but couldn’t resist touching. At first I was gentle so as to establish a level of Dry. It was. Not only dry, but the finish had evened out and settled down to the promised Designer Texture. “So that is what they are talking about!”. It looks good. Not really a flat finish, definitely not glossy, but somewhere in the middle, and with a feel of a very durable, well bonded coating. I don’t know quite how to describe it other than it has the feel of enough strength that it will not have to be babied. Perfect for the intended usage as a vanity table. 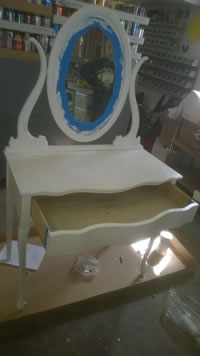 “Changing the way the world looks at home improvement” might be pushing it, yet I admire the boldness of the writer. It positively changed the way I will look at projects like this. I also can see now that there are many other applications for a product like this in my home. I enjoy repurposing and resurrecting items and I get even more satisfaction with when the result is stunning with less effort and time. That way, I can do more! There are several other decorative items I have that I would like to try this on including some metal objects and plastic surfaces. The label says it is good for that too, and to this point, the label has been right as promised. A great product, with great results. Even for me. Well done RECLAIM! Now go forth and paint!
EPILOGE: We decided not to use the two hole hardware that was on the dresser. It was a cheap restoration replacement and we did not like the feel. So we filled in the four holes and drilled two new ones. Repainted another coat of Reclaim Beyond Paint on the drawer front and installed glass knob pulls. Ahh. Much better. Cant even tell the holes were there!