A few weeks back, I was called in to rebuild a deck that had failed.  Failed is not the right word.  This thing disintegrated!  The deck was built technically right with the right size timbers and dimensional lumber for the substructure, however, Fir was used rather than redwood or treated lumber.  In many places the bottom the joists were in direct contact with the soil.  This on it’s own was a problem in the making.  But there was more.

The deck design incorporated a skirt that went from the walking surface to the ground.  This reduced airflow and trapped even more moisture.  But there is more.

The other issue was that the composite decking was installed with zero gap between the boards.  So, over time, the combination of ground moisture, gutter run off, rain, snow and humidity all started eating away at the structure and in just a few years after construction, the deck fell apart.  Areas of it were sagging, water was pooling on the surface, and the walking surface was falling apart.  Time for a rebuild. 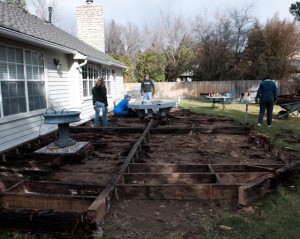 The homeowners liked the footprint of the original size and wanted to maintain the same look that they first had.   We calculated the costs and they said to get it done.  We did make a few changes though.  This time around, we elevated the deck a few inches above where it was the first time.  This got the lumber off the ground.  I also used redwood for all of the substructure.   And, in the process of building the frame, we figured out a better way to build the bench supports, the connection to the house was simplified and improved, and the center joint and decking direction change was enhanced.  We also connected the downspout for the gutters to a drain tube and ran it out into the yard and a pit.  As you can see by the photos, the tear out was a lot of dirty work.  And I am please to say, I did not have to do it!  This homeowner had her family help out and when I showed up 99% of it all was gone and ready for me to get to work. 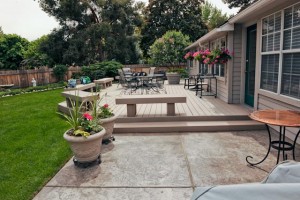 The first day, myself and two others were able to get the new frame built.  Day two we were able to install most of the new decking and on day three we finished up the deck.  Day four we installed the new “Floating” skirt, and built the new benches.   We also framed in a hole in the deck and recessed the huge potted bushes into the deck rather than setting the pot on the deck.  This will allow for drainage and will not create a sag in the deck or stains from the pot.

Now for the most critical thing to remember if you are building your own deck.  You MUST provide at least 1/4″ gap between the boards for drainage and for expansion and contraction.  Composite decking while very good, must be installed so that it can breathe.  It has to dry out.  As I mentioned earlier, with the deck now elevated a bit, in fact it is now flush with the door sill instead of stepping down a few inches, the skirt having a gap to the lawn, and the boards having the proper gap between them, this structure should last many, many years. 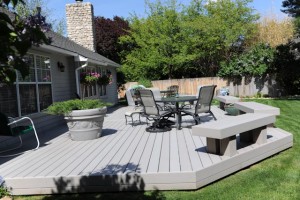 You would want to do the same thing for a redwood deck.  Ventilation is critical in all areas of our homes, and the back yard living areas are no exception.  In fact it is even more important here.  Of note, the textured and stained patio area was also added in as a replacement to a cracked slab that was there before.  I like the combination of different materials to add interest and create a different walking feel as you pass from one zone to another.