I like to paint. But painting does not like me.  Years of abuse to my hands and wrists has left me with a muscular attention span with a brush of about 10 minutes.  After that, my fingers lock up and feel like they are on fire.  So when I had the opportunity to put the Wagner Flexio 990 to some testing, I was excited to give it a try.

There are three large painting projects on my to do list, so this should be an interesting interaction with this tool.  To make sure I was prepared, I opened the box to look for instructions in the beginning rather than my usual after the fact. 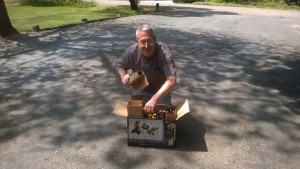 Packed well, I was greeted by an assembly of components that would form the complete Flexio 990.  My first reaction was that there was no way this all would be fitting back in this box ever again.  If you read ahead, you will see this proved to be not true!

As I read through the quick start guide, operation of the tool appeared to be quite simple.  My first project was going to be a side wall of my barn that for the last year has been unpainted after installation of some salvage siding.  Hey, it’s a barn right?  The perfect place to learn how to work the sprayer.

I previously washed off the siding and allowed it to thoroughly dry.  I checked caulking and attachments and masked off the windows and trim with some paper and tape.

As per the instructions, I dipped the suction tube into a gallon of exterior satin house paint, pointed the spray head into a bucket, turned on the switch and waited for the paint to arrive at the sprayer.  A quick adjustment on the amount coming out ( I found 5 on the 1-12 dial was just right for me) and I was ready to paint.

I need to say here that the sound of this sprayer is really cool.  The turbo fan inside spools up and creates a “Ready for Business” music that lets you know it is about to get interesting. 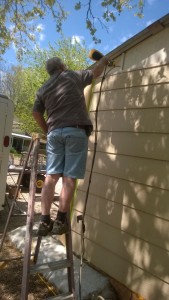 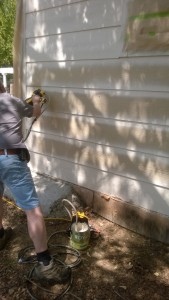 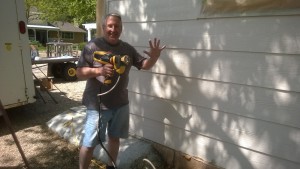 Starting at the top seemed logical to me.  I found the wide fan setting rather than the narrow worked best and as I progressed I discovered I did not need to turn the sprayer on its side to make horizontal coverage.  There is a rotation feature on the tip that allows for up and down or across fan spray.  Probably shows that in the instructions somewhere.

I painted along the trim sides, under the bottom edge of the siding, around the masked windows, and back and forth across the siding.  The coverage was wonderful and the pace of movement was comfortable and quick.  In just 5 minutes I finished the first third of the wall.

An entire gallon of paint was consumed in less than 20 minutes.  While the Flexio 990 is not extremely light weight, I did not find it uncomfortable in my hand, and I did not experience any physical difficulty completing the wall.  If I would had been doing this will a brush and roller as originally intended, I would have had to stop for the day after the first third. 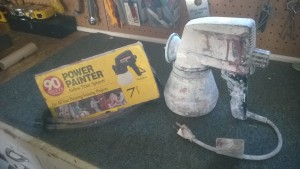 Time to clean up.  If you are at all familiar with spraying anything, especially paint, and especially through
sprayers such as this, you know that cleaning up the tool the right way is essential to the operation of the tool the next time you go to use it.  To prove this point, I will digress a bit here and show you the picture of my old Wagner Model 242.  I can’t even remember when I bought this.  I do remember however that when I was working early in my life at the lumber yard, I purchased a Model 50.  At that time the baby bear of the line.  I think there were 50, 100, 200, and 300 series painters.  Wow, that must have been mid 1980’s?    Anyway, I kept that 50 alive for a long time until I finally toasted it and bought the 242.  I bet I have pushed at least 50 gallons through that 242 and it still performs flawlessly because despite the exterior appearance.  The inside is spotless.  I considered using it to paint the barn, but you have to admit, that old dog is a bit loud.  BRAAAAP! 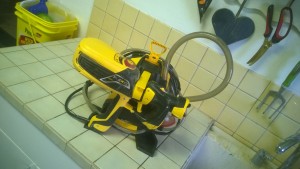 Back to cleaning the Flexio 990.  And the instructions to do so.  Reading through them, I thought there was going to be a lot to this, and there was.  But I took my time and followed it all to the letter because I know how important this is.  I can say now that after completing the cleaning process, my familiarity with the sequence will make for a more proficient and quicker job next time.  I am not intimidated by it for any reason, and if done properly, this sprayer should last a good ling time.  And oh yes, there will be a next time.  My neighbor saw the Flexio 990 in action and I even let him pull the trigger for a bit.  He wants to paint his house and that is my next project also.  We also have an interior section of our house to do as well as some wicker furniture that could use a freshening up.  Based on what I have experienced so far, this will be the right too for the job.